Audioburst Blog
/
Siri VS Google Now VS Cortana VS Alexa – Who Wins The Assistant War? 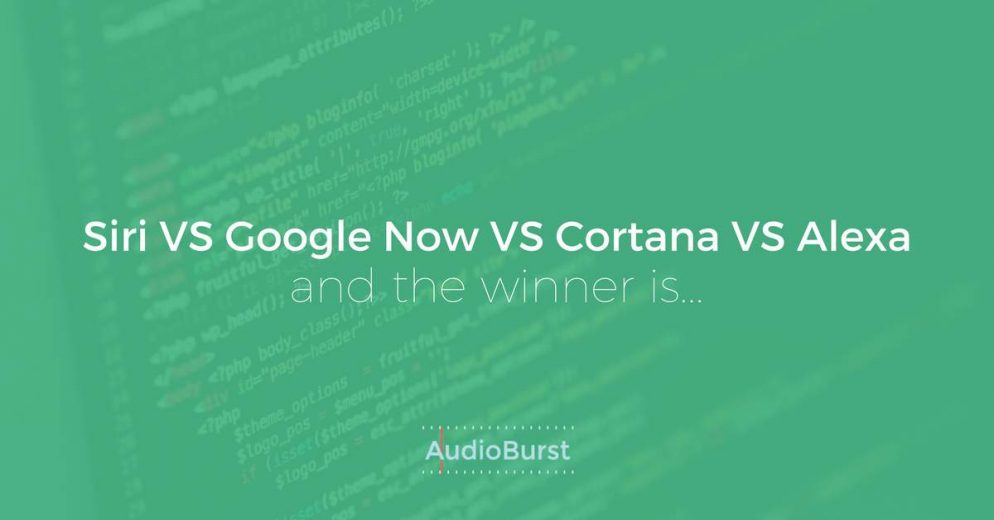 Siri VS Google Now VS Cortana VS Alexa – Who Wins The Assistant War?

How did we get to discuss Siri vs google? It seems like within months we went from trying to understand how Siri works to asking Alexa to turn on the lights when we get home.

Alexa, Siri, Google Now and Cortana all walked elegantly into our lives changing our daily habits. And there is more yet to come.

While being similar but also very different, each one of those VA’s has its own perks and drawbacks.

They all do sorta different things, but kinda the same way and they all have a similar purpose but perform with a slightly different approach… Confused yet?

It’s time to make some sense of this mess and put things in order.

We decided to evaluate and compare the 4 popular assistants based on different needs and categories  so you can decide – Which of the four leading personal assistants of the 2016 AI world performs best: Siri vs Google Now vs Cortana vs Alexa.

Siri VS Google Now VS Cortana VS Alexa

All voice-recognition systems are designed to recognize your speech patterns and personal accent as you use them on a daily basis.

Siri is great at understanding natural language. It responds to different ways of phrasing the same questions. Further than words, Siri’s “personality” identifies meaning and is the most natural assistant when using common language.

On the other hand, you need to be very close to your phone when you talk to Siri and it has to be your voice. Siri will have trouble understanding you otherwise.

Google Now was the most successful out of all when it comes to coping with a wide range of accents but, it’s still missing Siri’s “personality” and the ability to cope with natural language.

Besides the fact that you can also type to Cortana, its voice recognition is similar to Siri’s as it identifies meaning and not just words. It has some different approaches compared to Siri for the same questions, and even though it hasn’t been around for so long, it is a viable competitor and works surprisingly well.

Alexa is always attentive for its name. It has the most impressive microphone (and speaker) technology that can pick up phrases and commands in a normal voice from across the room. Echo’s speaker technology can hear any voice from wherever.

This can sometimes be a drawback as it may react to other voices coming from the television.

Siri is great for on-the-go purposes and therefore, it accurately gives you directions while you’re in the car. It is useful when you don’t want to pick up the device and need to send out a specific message from your phone. Other capabilities include searching the web, making calls, opening apps, setting up calendar events and alarms, looking up directions in Apple Maps and so on…

If you ask Siri for the news, it will give you a bunch of links but will not read the news out loud. Same goes if you want to buy something – Siri will give you the link where you can make your purchase but will not buy it for you.

Apple improved the knowledge for storing your personal data to have a more personalized service in the iOS 9 but there is still room for improvements in this aspect.

Google Now is the star when it comes to handling your personal life. It has a collection of personal data making your daily commute, your interests and your schedule so easy to control. This information is used for the “predictive cards” feature, which displays your interests before you even ask. It is the best system to anticipate your needs and proactively assist you.

Google Now will tell you the weather, give you directions to common places you visit, remind you about scheduled events, give you updates depending on your interests, play music and so on… You can also ask for information from your Google accounts.

Cortana is great with location-based reminders like “Remind me to call Dad when I get home.” It is also quick when it comes to searching the internet for information – however, when it comes to simple questions like “What day is it?”, it might get confused.

You can also make calls, send text messages, search the web, schedule calendar events, ask for the weather and give you information about places you frequently visit.

Like Google Now, Cortana uses your information and things you are interested in on its “notebook” feature in order to anticipate and provide you with information you might find useful.

As a mixture of both Siri and OK Google, you can either talk to Cortana for something you need or train it to anticipate information about your interests and life. You can also set hours when you don’t want to be disturbed.

The power of Alexa is made for creating your Smart Home. It is amazing for handling home devices, buying things online – like adding items to your Amazon Shopping Cart or placing an order of your supermarket weekly shopping list when you run out of food. It is also useful for making reminders, playing music, adjusting the thermostat or turning off/on the lights. Also, if you ask Alexa for the news, it will read its “flash” news briefings out loud.

When it comes to sending out a personal message, you must have a specific calling app, otherwise, it is unable to do so. Since its best purpose is for home devices, Alexa can give you travel estimates but you need to enter the mobile app in your current location.

Siri cannot interact with most of the third party apps. It plays apple music but it can’t ask for an Uber or play Spotify. It is limited to work only with other Apple apps even though it works effectively.

Apple integrated seven types of apps (Ride booking, Messaging, Photo and video, Payment apps, VoIP calling, Workouts and CarPlay) for iOS 10.0, but says more will be coming in the future.

Google Now is also working with a variety of third-party apps where you are able to add to-do-lists on Trello or play some music on Youtube or Pandora. Depending on the type of phone you have, you may have to activate Google Now from within the main Google search app.

The iOS version of the Google app is limited as it is primarily for web searching rather than being an all-round digital assistant.

Cortana is great when working with other apps on Windows devices and efficiently creates emails, reminders or notes.

Currently, only a few third-party apps can successfully integrate with Cortana but, as time passes, we should see more development in this aspect.

Alexa is great with third party apps reaching up to over 130 applications. You can ask for a car from Uber, play music on Spotify and even buy things online.

As mentioned in Techcrunch’s article, “After all, the Alexa app doesn’t even refer to its list of third-party software as “apps”, rather referring to these add-ons as “skills” instead – meaning, things that expand the functionality of the Alexa-powered Echo speaker.”

Siri VS Google Now VS Cortana VS Alexa – Who’s the winner?

Switching On When Needed

In order to activate Siri, you can press and hold the Home button of the iOS device you are using or leave the always-on option activated in order for the system to know that whenever you say “Hey, Siri”, it is the start of a new command. When your phone battery drops down below 20%, Siri turns off automatically.

There is an option that allows you to train Siri to respond only to your voice. This way, the system will not activate itself with other voices like the television.

To activate Google Now, you tap a microphone on the screen. As all other systems, you can also activate an always-on option which serves as an indicator for your digital assistant to listen for the phrase “OK Google” as the request for a new command.

“OK Google” can also be trained to react to a certain trusted voice.

To activate Cortana, you tap a microphone icon on the screen. Like Siri, when your phone battery drops down below 20%, it is turned off automatically.

Additional to a personal voice training option, Cortana also includes an option that allows it to activate “to anyone” in case you are sharing the device with other members.

Amazon Echo/Echo Dot will listen to “Alexa” for activation as long as it’s turned on. Moreover, there is also an option to turn its microphone off.

Alexa Assistant sometimes reacts to voices it shouldn’t (like the television) because of the advanced Echo microphone technology.

Siri is great for on-the-go as it is available on multiple portable devices. Apple is still working on making the use of Siri at home more effective.

Google Now is convenient for on-the-go. It is has a great hands-free accessibility to your mobile device, as Siri. However, Google Assistant, which is integrated into Google Home, is suspected to merge with Google Now in the near future.

As a combination of both OK Google and Siri, Cortana is great for on-the-go purposes. Moreover, Microsoft’s goal is to reach smart homes as Windows 10 will work with a wider range of devices and appliances in 2017.

Alexa is not a device you purchase for “on-the-go” services. The software is ideal and the most useful when creating your Smart Home.

Siri is available on iDevices which allow it to be accessible everywhere. In your tablet, phone and even in your wrist. Apple is making an effort to make it work better as a smart home device.

Google Now works on Android, iOS, and PCs, though its hardware-controlling capabilities are limited on iOS.

Cortana is available on Windows 10 desktop OS as well as Windows 10 Mobile, which Microsoft expects to be on 1 billion devices in two to three years. It is expected to be available also on Android and iOS in the future.

Alexa is available on Amazon Echo and Echo Dot which is great if you want to set it for your home, home devices and later on expand it to other rooms with the Echo Dot.

So in the Siri VS Google Now VS Cortana VS Alexa wars, who wins?

We’ve compared all four digital assistants – Siri, that has been around for a while, Cortana which is new to the game yet a viable competitor, Google Now, currently in a significant development stage and Alexa, a prominent technology for smart homes.

At the moment, even though they have the same technology, Alexa is in a different game. As a device with top performance for the smart home, it works great with third party applications and Amazon Echo’s speaker/microphone technology is exceptional.

Siri, Google Now and Cortana on the other hand, have a similar purpose leaning towards a more  “on-the-go” use.

Siri’s “personality” and ability to understand natural language makes the experience the most smooth and unique out of the three. However, Google Now’s personalized assistance automatically keeps your daily schedule updated with an amazing proactiveness. Cortana is the most flexible as it mixes Siri’s “personality” with Google Now’s proactiveness, but it is in its earliest stage and has a lot of room for improvement.

All three of them are working on developing improvements for smart home purposes and third party application services while Alexa is working on their “on-the-go”capabilities for delivering better assistance outside of your home.