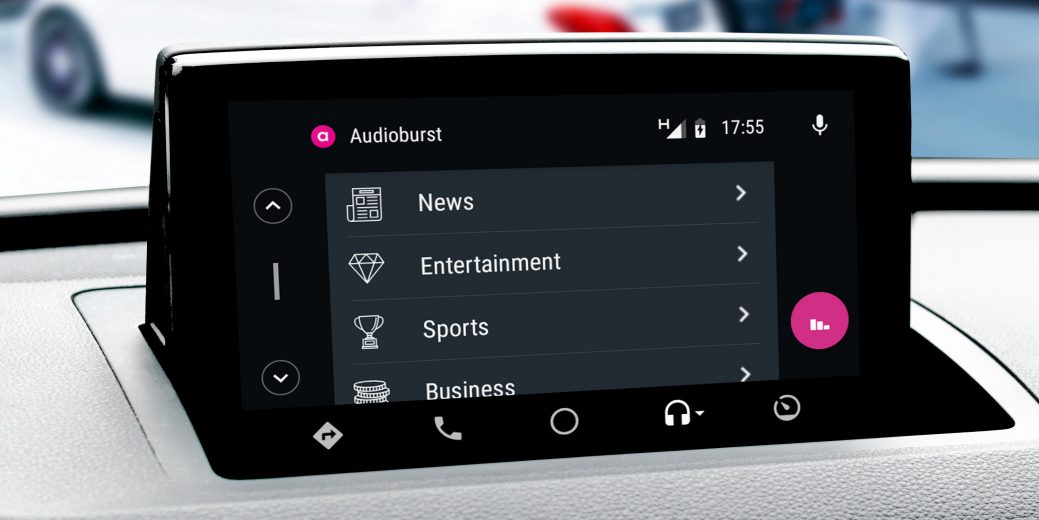 Psst…drivers, get excited — this announcement is for you!

In July 2019, we introduced Audioburst Auto, our initial solution for the Android Auto platform. Chock-full of features like topical playlists, voice control, and even a personal news feed, Audioburst Auto brought the best of talk audio in-car for the first time.

Over the past 3 months, we’ve been working on advancing our commitment to in-car audio experiences, and today, we’re excited to announce that the Audioburst app is one of the first to launch on Google’s Android Automotive OS.

Taking in-car experiences to the next level

The arrival of Google’s auto-focused operating system means that the days of being tethered to your phone while on the road are over! With native versions of Google Assistant, Google Maps, and the Google Play Store, even if you forget your phone at home, you can still access apps like Audioburst directly from your car’s infotainment screen.

The ability to run apps natively, however, is more than just handy.

Pulling in content via Bluetooth or a cable doesn’t compare to a native app, performance-wise. Developers are no longer trying to build apps whose functionality can hopefully be passable in-car. Instead, they can use Google’s Android Automotive OS emulator to build an optimized experience that looks good, feels natural, and caters specifically to the needs and wants of the driver.

In addition, by transitioning to a standard operating system, automotive companies are free to focus on the car, leaving the job of designing cutting edge, entertainment, navigation, and voice technology to developers and brands whom users already trust and associate with quality. Carmakers can, however, customize the UI, ensuring their infotainment systems maintain a familiar feel.

Both the new automotive OS and Audioburst app were debuted last week at Android Dev Summit. In addition, leading automotive manufacturers such as GM and Volvo are already working with the technology.

In fact, the new Audioburst app was spotted in the wild (along with the likes of Spotify, NPR1, iHeartRadio, and Amazon Music) at the recent Volvo XC40 reveal event as part of the infotainment system demo.

The choice to demo the operating system’s capabilities through the use of audio-centric media apps is important to note. It illustrates the importance of audio, both music, and spoken word, to the driving experience. While games, videos, and the selfie may reign supreme on mobile devices, in-car, they can’t hold a candle to the hands-free, vision independent ease of audio.

While every product release is special, we’re feeling energized by the innovation surrounding the next generation of in-car entertainment.

“It’s such an exciting time for the automotive space. People are constantly on the move and our busy lifestyles call for technology that can keep up. Having access to your favorite apps and entertainment in-car is a must, and we’re happy to help lead the charge in making that happen.”

The next time you hit the road, hit the road with Audioburst…you’re going to like what you hear!